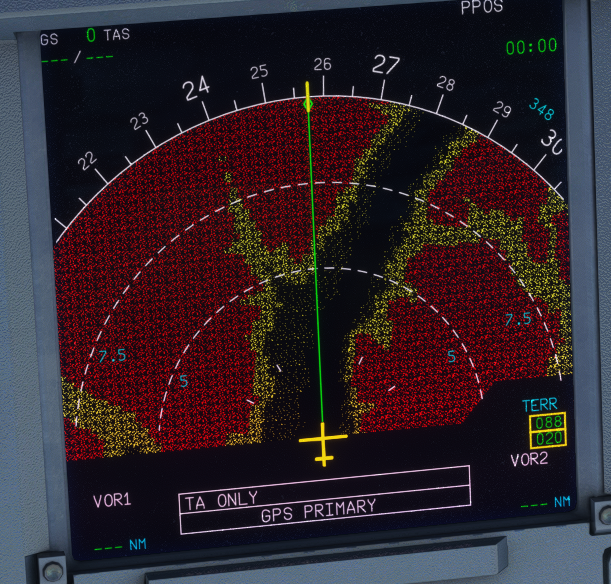 This feature is only available on experimental, as this feature is currently in testing, expect performance loss as we continue to optimise.

The Terrain Awareness and Warning Systems (TAWS) is a system used to alert the flight crew in a timely manner of hazardous situations ahead of the airport to avoid Controlled Flight Into Terrain (CFIT). A part of TAWS is to overlay the approach terrain on the ND, referred to as Terrain Awareness and Display (TAD), for the awareness of the crew. This display is derived from a database and subsequently can be out of date which can lead to TAWS making false positives and general nuisances to the crew.

The aforementioned database has a worldwide coverage and is defined according to a standardized Earth Model, dividing the surface into grid sets. Several optimizations have been made to the database to deal with size constraints within the aircraft.

The Terrain Display can be enabled on either the left or right Navigation Display. To enable the display, push the TERR ON ND pushbutton and the display will begin to overlay the terrain ahead of the aircraft in a sweeping motion.

The display contains different several details and understanding these details will allow you to effectively use the display as-well as understanding it's faults. If the aircraft is descending more than 1,000 ft/min then the display provides a 30 second advance display for better projection.

The TAWS provides two different modes of terrain display on the ND.

In this mode terrain is displayed with regards to the absolute terrain elevation (referring to the sea level instead of the aircraft elevation). It aims to improve terrain awareness of the flight crew. If the aircraft is more than 2,000 ft above the terrain, the terrain is still displayed but with a gradient of green (see right-side of image below). It also displays the highest and lowest terrain elevations as two figures in the bottom right corner of the display.

The TAWS displays the surrounding terrain on the ND according to the aircraft's current altitude with color-coding to help provide an understanding to the crew to where they are in relation to the terrain.